MakeMIT, the largest annual hardware hackathon in NA, is my second Christmas. Teams of four are given 24 hours (or less, depending on the year) to construct a hardware project of their choosing. In 2016, four hallmates and I chose to create an automatic hotdog cooker. 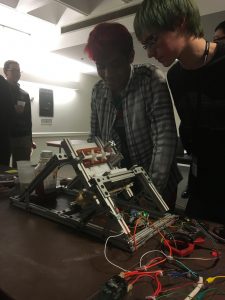 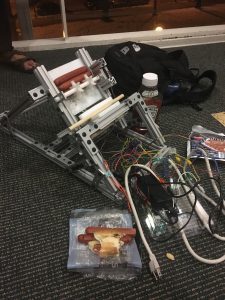 The machine would first load a hotdog into a tray by means of a cogged hopper. It would then stab it with two electrified Xacto knife blades sending 120VAC through the hotdog. After a minute, the hotdog would go from cold to sizzling – at which point a trapdoor would open and drop the hotdog into a bun.

Somehow, this machine was chosen (out of 100+ teams) to be the top ten of the competition.

We were asked to return the next week to improve our design in another 12 hour session. We were told that we would now be given a ~$500 budget to purchase additional parts of our choosing. Our shock at being selected for this didn’t stop us from happily obliging. Grandiose plans were formed to fully automate our hotdog-cooking machine.

Disaster struck, however, when we arrived the next week to find that none of our parts had been purchased! A mistake on the part of MakeMIT had resulted in most of our requests remaining unfulfilled; we were left with nothing but scrap parts and what we had in our dorm. Nevertheless, we persisted – after all, they did at least buy us our packs of hotdogs. 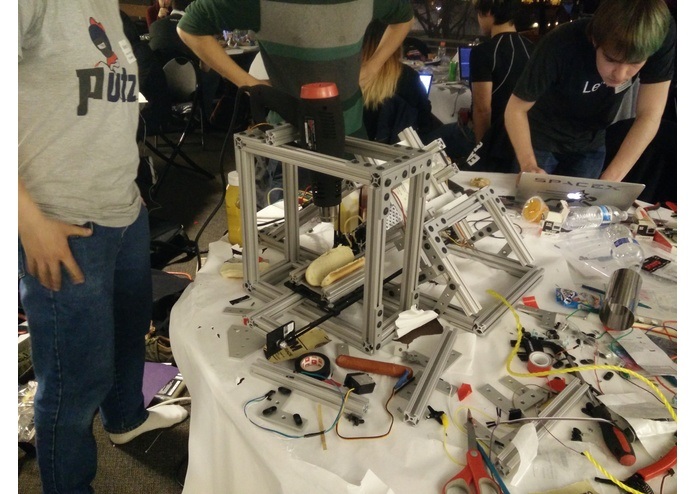 The final machine was now equipped with:

The machine took 1 minute to present the user with a perfectly cooked hotdog on a perfectly cooked bun. It was “ghetto” to say the least; the machine was built mostly out of old parts that our team members had scrounged from school dumpsters. But like a hole-in-the-wall restaurant, our machine still delivered results.

It was later thrown out by our dorm’s cleaning staff over the summer break. Such is life.