Every college student with a mechanical engineering degree builds a robotic bartender at some point in time. They’re usually made out of peristaltic pumps and MDF, controlled by an Arduino, and fall apart after one usage. If they don’t fall apart, they get left uncleaned and become a habitat for new exciting forms of life. I wanted to do better.

Meet Re-rack, the nigh-indestructible robotic bartender. Unlike other robotic bartenders, Re-rack has no fluids moving through tubes, no exposed moving parts, and no buttons. This is made possible by a design that uses negative pressure to release fluids from the bottles and a built-in Wifi hotspot that gives you access to a browser-based interface. Its waterproof design makes it extremely easy to clean; a three-minute hosing down is enough to make it spotless.

Re-rack is also designed to be a machine that focuses on throughput. Nobody has time to watch 2 peristaltic pumps whir for a few minutes to make one drink. Re-rack takes a maximum of 5 seconds to make a drink.

The entire frame is made out of waterjet HDPE and teflon - both of which are slippery food-safe plastics. Sticky sodas and other beverages wash off easily as a result.

Fluids are released from the bottles by allowing air to enter them through a small hole fed in from the bottom. A stainless-steel J-bend acts as a spout. Both are nearly impossible to get gunked-up.

All of the electronics are housed within a waterproof box attached to the back. All connections going in and out are protected by waterproof cable glands.

The actual electronics are neatly bundled together on an acrylic sled along with 8 air solenoids. An RPi configured to broadcast a hotspot lets users configure and command the machine. 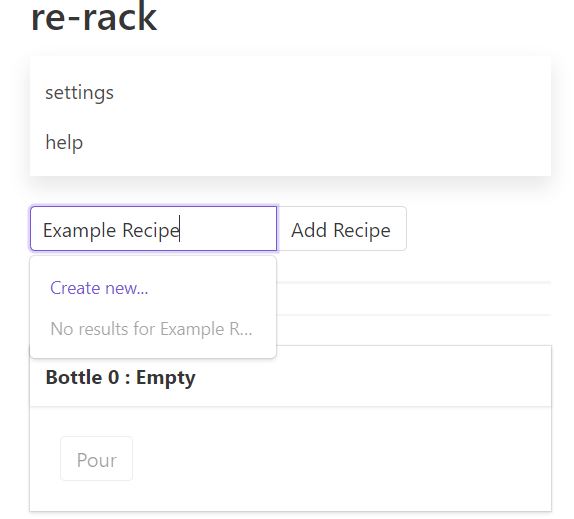 The interface is made using Vue.js (my new favorite framework!), Buefy, and Flask. Recipes can be added and poured with a few taps on any modern browser. No 2 button Arduino interfaces to be seen here!

Re-rack has lived up to its goals already - the picture seen at the top was taken after it poured around 200 drinks! It will surely contribute to poor decision making from many future college students.

No bar is complete without a bartop. I was coincidentally taking a class on stagecraft, so I decided to build a robot-ready bartop as a final project.

The top is a butcher-block-style pine tabletop with features CNC routed in to guide spilled liquids into a magnetically mounted drip tray.